Join Date: Jul 2019
Posts: 8
Mentioned: 0 Post(s)
Quoted: 1 Post(s)
600 rr coil mod / higher voltage?
Hey all. So, I recently had my CDI controller fail. I did all the tests and received help from a fellow RC owner. It was the CDI. My question is I found on this site all the threads about failed CDI. It appears that most believe that something caused the failure of the CDI. I tested the stator and Rectifier/Regulator....those were both good. I replaced the R and R just in case. Now, it appears that the rear coil was suspect. So the question is...does anyone think that due to the location and how all the wiring is right next to each other (coil and the r and r) that voltage could have leaked and caused the failure? Since this happened I ordered new coils and caps...well the rear coil is now discontinued.....so I did the 600rr coil mod. So, second question... the bike feels like the spark is snappier... kinda like when Ive put multiple spark discharge on a car (Think MSD)....I believe that the threads here say that from the CDI the factory coils get a 100v signal....where as the 600rr coils would get 12 volts when installed on a 600rr. That would increase my spark voltage on my RC....right. If any one can confirm or deny this I would appreciate it. Thanks.
Ironman is offline
Quote Quick Reply
post #2 of 28 (permalink) Old 09-27-2019, 09:21 PM
Wibbly
Senior Member


i don't really believe that this is going to change anything as the fuel will be ignited either way. but i do agree that the primary voltage is different.

i don't think your story about "voltage leaks" is valid though. it may sound nice to the ear but it's a nonsense use of terms.
Joe XR likes this.
Wibbly is online now
Quote Quick Reply
post #3 of 28 (permalink) Old 09-28-2019, 05:58 PM Thread Starter
Ironman
Junior Member


Join Date: Jul 2019
Posts: 8
Mentioned: 0 Post(s)
Quoted: 1 Post(s)
Thanks Wibbly. I recently purchased a secondary voltage tester and I will test the coils and see what the output is to the spark plug. Does anyone know what the 600rr secondary coil output voltage is?

As far as voltage leak, if the secondary spark plug coil wire (6k volts plus) is damaged (i.e. old and cracked) voltage will exit the insulation to the closet ground. I am a commercial electrician and I use a megger frequently on circuits to test Voltage leak and damaged wire. Since a megger works like a stun gun I didnt want to put it through the coil. Since the Regulator/Rectifier has a ground wire on the output side (DC) I think its possible. Just wanted to know if anyone had a CDI failure and a rear coil failure similar to my problem. Again, I do not want to buy another CDI $$$$$$$.


Join Date: Sep 2015
Location: Edmonton, AB
Posts: 1,548
Mentioned: 7 Post(s)
Quoted: 326 Post(s)
If you had a short on the output of the ignition coil exactly nothing would happen. It's literally designed to short to ground. The impedance of the coil itself prevents any issues. All you'd lose is the spark at the plug.

If you had a short on the low side of the ignition coil it may overload the transistors in the cdi.


The rectifier is nowhere near the rear plug wire anyway. If you did have "leakage" it would just go to ground and end up at zero potential. All its voltage is dropped across the gap. It can't "zap" anything. If it could your spark plugs would destroy your bike.
Joe XR likes this.
Last edited by Wibbly; 09-28-2019 at 07:10 PM.
Wibbly is online now
Quote Quick Reply
post #5 of 28 (permalink) Old 09-30-2019, 05:57 PM Thread Starter
Ironman
Junior Member


Join Date: Jul 2019
Posts: 8
Mentioned: 0 Post(s)
Quoted: 1 Post(s)
Thanks again wibbly. However, the connection for the input side Regulator/Rectifier (AC) is right next to the stock rear coil and doesnt have a boot over the connector. The output side of the Regulator/Rectifier (DC) is right next to that and has a boot over the connection. Why does the DC side have a boot? Since you have tested my electrical knowledge (which I appreciate), Im going to say that boot is to stop interference or leakage. Guess Ill do some research on those boots.
Ironman is offline
Quote Quick Reply
post #6 of 28 (permalink) Old 09-30-2019, 07:16 PM
Wibbly
Senior Member


Join Date: Sep 2015
Location: Edmonton, AB
Posts: 1,548
Mentioned: 7 Post(s)
Quoted: 326 Post(s)
there are boots over connectors all over the bike. it's probably just to stop the connectors knocking together and making noise or wearing prematurely. it's certainly not to protect against "leakage" from the high side of the ignition coil that's located several inches away lol 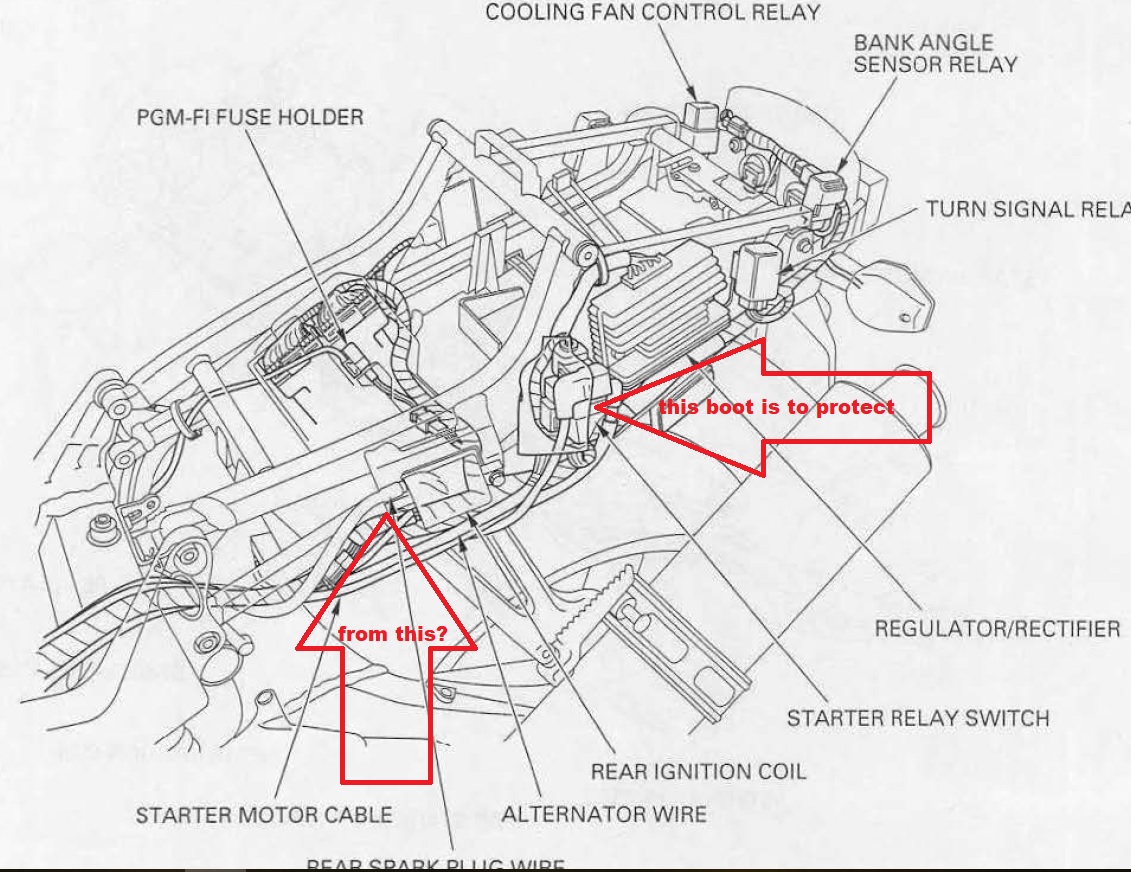 
Join Date: Jul 2019
Posts: 8
Mentioned: 0 Post(s)
Quoted: 1 Post(s)
Thanks for the visual. If you include a measurement youll see that distance is a few inches. And actually the AC side from the stator is actually closer than the DC side (with the boot). Since at 5000 rpm the AC voltage can be high as 80volts phase to phase ...I still believe that it possible that if the spark plug wire has degraded there is a potential for leakage that can cause damage to sensitive electronics (the CDI). Since no one can give an exact cause of the CDI failure why would you totally discount my theory? As a commercial industrial electrician I work with control cabinets that have a variety of voltages in one enclosure. I have personally repaired damaged to these systems when a damaged wire has leaked ... and sometimes you can see where the arc occured. That distance is more than the distance shown in your illustration. Making the repair easier. Sometimes it takes some trouble shooting to figure the same circumstances. Again, I thank you in regards to having to really think this all the way through. With my problem all of the components were ok except the rear coil and the CDI. So, to you Wibbly, do you have an answer or a theory as to how those components failed at the same time (approximately). Maybe you can enlighten me about something I havent thought of.
Ironman is offline
Quote Quick Reply
post #8 of 28 (permalink) Old 10-01-2019, 12:05 AM Thread Starter
Ironman
Junior Member


Join Date: Jul 2019
Posts: 8
Mentioned: 0 Post(s)
Quoted: 1 Post(s)
Oh and I did a little research on the 600rr coils. Turns out there is a company called energycoil that makes improved coils for the 600rr and other bikes. They claim to increase the voltage on the secondary side of the coil which they also claim to increase horsepower. They didnt give specs on they coils or a dynontest results. However on I believe a site like this for I think it was Fireblades...An individual was able to do a Dyno test and claimed to increase HP by 2. Although he said they factory coils were aged and maybe not working as new. My point is that a dyno test appears to have proven my theory that its possible to increase HP with higher voltage at the spark plug.
Ironman is offline
Quote Quick Reply
post #9 of 28 (permalink) Old 10-01-2019, 12:36 AM
Wibbly
Senior Member


Join Date: Sep 2015
Location: Edmonton, AB
Posts: 1,548
Mentioned: 7 Post(s)
Quoted: 326 Post(s)
Your "leak" would go straight to ground. The coil itself is bolted to the grounded subframe, and has a large ferrous core. Any issues there aren't going to jump past a bunch of grounds and into a +12v system several inches away.

80vac is a contact short. You could slice the insulation and it wouldn't short to anything. So I'm calling bs on the stator wiring theory.

I told you a low impedance on the low side of the coil could cause an overcurrent condition on the transistors in the cdi. Any circuit trouble on the output of the transistors can overload them. The cdi is fed by a 30 amp fuse so the transistors are not suitably protected.


I'm a master electrician as well, and own a variable speed drives and controllers company. You work isn't lost on me. I'm just telling you that your electronics didn't get "zapped" by the high side of the coil.


Join Date: Jul 2019
Posts: 8
Mentioned: 0 Post(s)
Quoted: 1 Post(s)
Again Wibbly thank you for your insight. I can tell your knowledge is excellent on these electronics. Ok so, the low impedance on the low side of the coil and you say that could cause the failure of the CDI transistors...right?.... I totally agree with what you say. How can I test (where and which terminals/connections) to verify I have the correct impedance so I KNOW that I have corrected the problem and wont have another failure. I really do appreciate this banter! And again I dont want a repeat of the CDI failure.
Ironman is offline
Quote Quick Reply